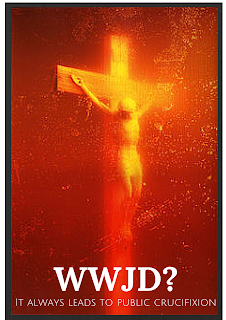 Posted by Andrew Smith at 19:35 No comments:

I think it's been a long time since Christians did something divine that provoked outrage. I don't mean the kind of outrage that deservedly comes when child abuse or embezzlement is uncovered in the church. What I mean is the kind of action that is indisputably Christian, the kind that can't be dismissed by saying that it was done by "so-called Christians." Something about being Christian has offended people so much that they persecuted and executed the early church.

The likely candidate is the Christian confession of faith. It says Jesus is Lord, Jesus is the Christ, Jesus is the Son of God. Those confessions were in opposition to the requirement of the day to say that Caesar is Lord, or to deny that Jesus was more than merely human. Beliefs drive actions. And actions provoke reactions.

In the last few weeks in Australia, the debate over what Muslim women wear in public has reached fever pitch. Some people have called for a ban on the burqa and the niqab. Some people who don't wear them for religious reasons have started wearing them in solidarity with those who do. Something as simple as a veil has become a focus for a kind of culture war. The public is outraged. One side is outraged by the women who wear veils, the other side is outraged by this outrage.

But if clothing symbolises the divide between Islam and the rest of the world, what symbolises the divide between Christianity and the rest of the world? The famous "What Would Jesus Do?" quip that was used to stir people into behaving more like Christ has an ominous dead end: crucifixion. Whatever it is that Jesus would do, it ultimately ends up at the cross, at an execution by the authorities and dominant culture of the day. If you want to do what Jesus would do, then get ready to make enemies and be persecuted.

That's why I have this question. What do Christians do that is so outrageous as to cause our society to persecute us? What authentically Christ-like behaviours do we have that are offensive to the world we live in, so much so that it reaches the front pages of news sites?

Our persecutor in the first century was the Roman Empire. That Empire continues today as consumerism. It's a way of thinking that surrounds us and drives us. Consumption is Lord of that world. But for us there is one Lord, Jesus Christ. If we are to genuinely follow Jesus, we have to turn our backs against the Lord of Consumerism.

But do we really do that? What does that even look like?

Posted by Andrew Smith at 19:34 No comments:

The prayer of faith

When I first became a Christian...

Let's back that up a bit.

When I was a child - a mere infant! - my grandfather baptised me in his church with water from the Jordan River. As a good Church of England priest he followed the baptism service that has been in use for centuries. He asked my parents to answer on my behalf, and he put three important questions to them.


Do you turn to Christ?
Do you repent of your sins?
Do you renounce evil?

In that tradition, my parents had done two important things for me. They had given thanks for my life, and they promised God that they would point me towards Jesus. Many years later, when I was old enough to decide for myself, I stood before a bishop who asked me the same questions. And that was the day I became a Christian.

The turning is an acknowledgement, a confession of faith. Turning ourselves to Jesus is answering, "You are the Christ, the son of the living God," just as Peter did. It is the turn towards salvation, towards a lord who isn't Caesar, towards the person of Jesus and not the institutions of Rome or Jerusalem or Athens.

Do you repent of your sins?
There is something about turning to Christ that represents where we are going. In just the same way there is something about repentance that is a turning away from where we have gone wrong already. Throughout Jesus' ministry there is the call to repent. It's where he starts in Mark. It's the encouragement he gives to the woman caught in adultery.

In repentance we acknowledge the hurt of our own actions, the hurts we have committed against others, against God, against ourselves, against creation itself. This is our apology, our sorry, our recognition of the value of who and what we have hurt.

In renouncing evil, this is the turn away from the institutions of sin as well. We turn away from Empire with all its consumerism and money-worship. Our backs are turned to it and to all that it does.

Three promises. Three movements of conversion. When I first became a Christian these were my words. My salvation prayer was as simple as this.


I turn to Christ.
I repent of my sins.
I renounce evil.

And every day I promise them again.

Posted by Andrew Smith at 19:03 No comments: