A kind relative has given me a copy of Zizek's Less Than Nothing and, with a couple of quiet hours now open to me, I've begun the Herculean task of reading it. For the uninitiated this book has 1010 pages of text. I've paused on page 10 to write this.

Thankfully his writing style has improved on his earlier efforts. It's more clear than before and reads less like a transcript of his lectures and more like an actual book. And of course he assumes that the reader is the Model Reader, knowing everything that Zizek knew at the time of writing.

So, like many people who'd grown weary of Zizek's style I hadn't planned on reading this magnum opus. It's vast and complicated, and I imagine that much of it is beyond me... eppur si muove.

Even though I'll put it down time and time again, eppur si muove.
Posted by Andrew Smith at 12:07 No comments:

Email ThisBlogThis!Share to TwitterShare to FacebookShare to Pinterest
Labels: eppur si muove, Less Than Nothing, Zizek 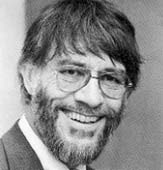 It must be a standard undergraduate question: who is the suffering servant? I had it as an essay question. I'm sure I wasn't the first and that I won't be the last. Oddly, I can't remember what my answer was. I remember being influenced by Norman K. Gottwald, though (the smiley bloke in the picture). His monumental work on The Tribes of Yahweh and his fantastic essay on Deutero-Isaiah (Social Class and Ideology in Isaiah 40-55) were formative. I seem to recall the lecturer telling me with a twinkle in his eye that my paper on Deutero-Isaiah announced that I was a card-carrying pinko.

I found myself back in Isaiah recently, wondering if my view had changed much. I read through a few chapters and much of it started coming back to me. Written by an exile, these chapters romanticise Israel and lionise the exiled upper classes. For a few moments I wondered if the author was slumming as he wrote, being ever-so-grateful to the peasants left behind, but that soon faded away. I'm more inclined (but as with all things scholastic, not utterly convinced yet) to think that the servant of chapter 53 is an audacious claim that the exiled Isaiah makes about the exiles themselves.

For the most part I come to this point from the connections between punishment and banishment. The servant is "taken away" and "cut off from the land of the living" to go to Babylon, taking the punishment on behalf of the whole nation. Conversely, it's the "people" the "many" and the "multitude" who are both at fault for the punishment and who are the reward once the punishment is complete.

It almost goes without saying that the familiar Christian-revisionist1 account of the passage throws all of this out. I think that Jesus would have had passages like this in mind as he prepared for his trial. He'd already imitated the Psalmist's verses that Jerusalem's king would ride in on a donkey, so why not also invoke the image of the suffering servant by not opening his mouth to the Romans and Jews? It becomes a motif, rather than exilic ideology.

It fits into the notion of penal substitutionary atonement neatly, and I think that makes me somewhat suspicious of the text as explicitly Christian. I think that even if Jesus redeems the motif away from an arrogant supposition of the ruling classes to a crucified peasant as scapegoat, there are a few too many gaps around the edges for the whole thing to fit together. Is Jesus' death really a parallel of the Babylonian exile?

For today only my answer to the slippery question of the identity of the suffering servant of Isaiah 53 is the exiled class of Israelites. Check in again in another decade to find out if I've changed my mind or whether Gottwald has cast an even longer shadow over me.


Notes
1. Sorry, should I have said "Christian hermeneutic" instead? It's a fact of Christian history that we claim Hebrew scriptures and imbue them with our own interpretive bias. Jesus did it and so did the rest of the New Testament writers. Call it hermeneutics or revisionism if you like. Maybe we should just call it hijacking.
Posted by Andrew Smith at 21:57 3 comments:

Advent (the religious season) is meant to hold a deeper sense of anticipation. It's the start of the Christian year and is the time that we prepare for the arrival of Christ, both as a baby and as the eschatological Christ. The expectation of a baby is exciting and terrifying and there are probably some parallels to be drawn between a newborn and the divinity/demands of Christ. At the same time we are reminded that Christ has not just an incarnational presence in the world but also an eschatological presence that we hope for and anticipate. Infant expectancy should point us towards eschatological expectancy.

As the beginning of the ecclesial year, Advent is a little subversive. It's a rejection of the secular calendar, the financial calendar. Instead it's a calendar based around the expectation of Christ. Instead of new years resolutions and hangovers, Advent is an opportunity to look forward to something beyond personal improvement goals and instead catch a glimpse of an entirely new creation.

Sure, Christmas is around the corner but in the middle of the consumerism and travel plans we can lose sight of the larger hope that we have, that the new creation is now and not yet.
Posted by Andrew Smith at 21:49 No comments:

Email ThisBlogThis!Share to TwitterShare to FacebookShare to Pinterest
Labels: Advent

How the Locals Talk

Ever since I moved to Perth I've attended the same church. It's similar to some churches we've been to before but it has some characteristics which distinguish it. One that especially pings on my radar is the language. Some of it is uncommon in other churches, but isn't quite unique to this one. I guess it's fair to say that it's prominent here especially when compared to where we were but not so prominent compared to elsewhere.

I guess it's just really obvious to me since it isn't language that I use in everyday conversation in the same way.

I've started a list of the most notable and made some observations about how they're used. This isn't a criticism or an attack, just observations.

Presence. This has some variation in meaning depending on the speaker. Typically it's used in the sense of the presence of God which arrives at a location (c.f., Ezekiel 1, Acts 2 and so on). Most usage connotes the view that God is not present until he's invited. I suspect that no one would openly support that hypothesis despite the implication. Of course, presence only makes sense if there is also a...

Place. It's a kind of catch-all, covering the church auditorium, someone's house, or wherever. The interesting part of this word is that it always precedes the invitation of a presence (see above). A place is only ever a place which is about to become a sacred place. It's used in prayers which invoke the presence of God (for example) "right across this place."

House. Perhaps derived from the Israelite understanding of the temple, in this church it's analogous to "parish congregation" from Anglican or Catholic structure (also words I don't use on a regular basis). The house is this congregation of people, in particular but not exclusively as the people who are assembled in the church building. The notion is somewhat foreign to the New Testament which uses different language to describe gatherings and communities of believers. House is, however, consistent with the idea of the worship service as a gathering at a celestial throne room (c.f., the architecture of the tabernacle). The believers gather in the house and are part of the house.

Floodgates. The full phrase is typically "floodgates of heaven" and most often appears in songs or in prayers asking for the spirit to descend upon the place. It's not a biblical metaphor but a contemporary metaphor. In the biblical texts a flood is always an instrument of destruction, never an instrument of blessing. There is an exception in Ecclesiasticus and possibly in Psalm 93 (although the glory of Yahweh is often found in his judgement and destructive power). Language isn't static, however, so it's not worth digging too deeply into the subtext. I just hope no one is singing along expecting a biblical flood to arrive soon.

I hope to find a few more. These are certainly the most obvious examples and give me a little insight into this church and its wider movement.

Posted by Andrew Smith at 23:59 No comments: