Faith or Faithfulness? The Votes are in 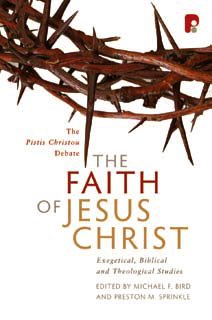 Having just finished, after a very long time[1], The Faith of Jesus Christ the verdict is in. On the question of whether pistis christou should be translated as "the faithfulness of Christ" or "faith in Christ" it seems that the majority of these scholars are in favour of the former. Admittedly this debate isn't a democracy and neither is this a sufficiently wide sample group from which to develop a proposition that "most scholars believe." Nevertheless, the book presents more arguments for both sides (and some third ways) than the average lay reader would have encountered. There's a lot to chew on in these pages.

I especially liked the closing essay by Ben Myers. Written for easy reading without diluting the content, it summarises much of Barth's comments on the debate and probably was amongst the most persuasive in the book. Loosely speaking the position is that all righteousness comes from God and it is God's faithfulness that makes it possible for humanity to be saved and thereby triggers faith and faithfulness in humanity.

OK, so it's loosely speaking.

Despite my trivialising of Barth, this is close to the position that I also end up taking now that I've read the book. There appears to be enough grammatical evidence, textual evidence and contextual evidence to warrant it. The effort of salvation is on the part of God, and it provokes a response of faith. The response is not the means of salvation, but the acknowledgement of it.


Notes
1. With several months of not even touching the book at all because I relocated across the country.
Posted by Andrew Smith at 21:57 2 comments:

Matthew's gospel only includes angels at the beginning (1:20-21, 2:13-15, 2:19-20) and at the end (28:1-8). Especially in chapters 1 and 28, the angels tell people not to be afraid. They tell Joseph not to be afraid to take Mary as his wife and they tell the two Marys not to be afraid at the empty tomb. In and around the same passages of angelic activity Matthew records two others who are afraid, but who aren't encouraged by the angels. Early on, Herod and "all Jerusalem" were frightened (2:3) and later on, the guards at the tomb "shook and became like dead men" (28:4).

Herod, the guards and all Jerusalem are afraid but get no consolation. Who do they represent? It's probably an easy fit to say that they represent empire; the machinations of humanity to which God says an eternal "No!" In a way, that's consistent with the broader content of the gospels. Jesus is the messiah who poses a challenge to Rome, to the Jewish populace and to collaborators with both of those authorities. The gospel of Matthew has a mission for Jesus, and standing in the way of that mission are (amongst others) Herod, all Jerusalem and the tomb guards. When God intervenes it provokes fear. The actions of God, mediated through the activities of the angels, impose on their position in this world.